Autonomous Vehicle Manufacturers: The Race to Self Driving Cars

We are just getting used to the idea of electric cars and following hot on its heels is the futuristic phenomenon of driverless vehicles. The concept of sitting in a vehicle with no control over its operation may be thrilling or chilling, depending on your point of view, but the likelihood of a driverless vehicle handling our narrow winding rural roads is still some way in the future.

Highways are another matter however and the top selling car brands in the world have been working on driverless vehicles for years. While some tech companies have been working on autonomous technology even longer. Waymo, the self-driving unit of Alphabet (formerly a Google project), has been developing self-driving technology since 2009. Waymo were the first company to offer a commercial taxi service using driverless technology when they unveiled Waymo One in the suburbs of Phoenix, Arizona in December 2018. Waymo is topping the list of self-driving vehicle disengagements and has accumulated more test miles than any of its competitors. It’s important to remember that this testing takes place in near ideal driving conditions in Arizona. Waymo’s state-of-the-art technology means that car manufacturers are interested in collaborating with them to avail of their AI (Artificial Intelligence) technology. Chrysler and Jaguar are two such companies. Other tech companies that are heavily involved in driverless technology are Apple, Uber, Nvidia, Oxbotica, Baidu and Huawei.

For those of you that are a little apprehensive about getting into a car that has no steering wheel, be assured that Ireland has a long way to go before introducing driverless vehicles. For starters, our current legislation doesn’t allow driverless prototype testing on public roads and the Department of Transport has no immediate plans to change this law. Ireland currently doesn’t have the 5G technology or infrastructure to support driverless cars and will need large scale investment to develop and introduce these vital elements before our driving becomes automated. For example, in the future, there is the potential to make motorway lanes narrower because autonomous vehicles won’t veer off a road as human drivers sometimes do.

Another area our government will need to address is the introduction of a regulatory framework for areas such as safety, licensing, liability, insurance and data protection. For example, driverless vehicles collect information such as weather, traffic lights and maps and share it with other cars to build up a database in order to provide a smoother driving experience.  However, the artificial intelligence technology of these cars also tracks human movement and how this personal information is stored and protected is vital to our safety and also to avoid cyber hacking. Legislation of this kind has yet to be introduced and is likely to require lengthy investigations and deliberations because of its serious nature.

A fully autonomous vehicle is capable of deciding on and taking a course of action, such as steering or braking, without the need for human intervention. Driverless vehicles use a combination of radar (radio waves), Lidar (laser pulses) and cameras to detect and avoid objects and humans. Based on the environment and data collected on previous test drives, the car’s computer builds up a map of the area and the obstacles such as congestion or traffic lights, on the intended route.

According to the RSA, autonomous vehicles are graded on six levels:

Here we will take a look at the main car manufacturers in the race to launch a commercially ready fully autonomous vehicle and what that really means.

Like many of the other driverless car manufacturers GM appeared to lose momentum in the race for fully autonomous technology. In 2016, GM bought Cruise Automation, an autonomous vehicle company along with a Lidar technology company called Strobe, to help advance its self-driving technology. GM announced plans to launch an autonomous taxi service in San Francisco in 2019 but recently they have pushed out the launch date, stating that instead they will spend 2019 intensifying their testing in San Francisco and fine-tuning other elements of the proposed service.

Currently GM provides a self-driving system called Super Cruise but it only works on highways that GM has already mapped and when the car drives on a highway that’s not supported, it returns full control of the car to the driver. GM has plans to start testing their cars in the urban jungle of Manhattan. The pulsating energy, unpredictability of pedestrians and impatient drivers is going to test even the very best AI technology.

Cruise has developed technology to adapt Chevrolet Bolts to be fully automated and these cars are not allowed to enter school or construction zones. The insurance for these cars is reported to be $5 million dollars. GM has also developed a fully autonomous car with no gas pedal or steering wheel, called the Chevrolet Cruise AV, but there is no hint of when this could be commercially ready.

Volvo is a little behind in its driverless technology and plans to start production of its Level 2 assisted vehicles in 2020. To achieve this, in 2018 Volvo announced they would be using Nvidia’s Drive AGX computer to integrate self-driving technologies into their vehicles. In June of this year, Volvo signed an additional agreement with Nvidia to jointly develop the decision making system of autonomous trucks and production is to begin immediately. Volvo also has an agreement to collaborate with Uber. Uber recently launched a modified Volvo XC90. The car operates on a combination of human controls including steering wheels and brake pedals, with automated installed steering and braking systems.

Daimler and BMW have partnered with each other to advance their self-driving technology ambitions. They plan to concentrate on driver assistance systems, autonomous driving on highways and parking systems. They are aiming to be commercially ready in 2020. Daimler’s Intelligent Drive, which is available in some Mercedes vehicles, is reported to be close to a fully autonomous car, however it still requires the driver to be fully aware at all times so not as close as one might think. BMW has previously worked with Intel, Mobileye, Nauto, and Baidu.

In 2017, Audi announced it would be launching autonomous vehicles, in partnership with Nvidia, in 2020. Nvidia’s AI technology will enable Audi to develop their driverless technology. The partnership plans to develop a Level 4 autonomous car for release. Audi A8’s driver assist system, Traffic Jam Pilot, is reported to be very close to fully autonomous driving but it is not available in the U.S. due to legal and infrastructure issues. The A8 operates with the help of radar, Lidar and cameras monitoring its environment and is reported to be a Level 3 autonomous car, where the human driver needs to take over at certain times.

In 2018, Audi and Huawei signed an agreement to developed autonomous technology and recently revealed a prototype of the Audi Q7 which combines a leading car brand and state-of-the-art ICT technologies. They promise to deliver safe, comfortable and intelligent autonomous cars.

As well as Audi, Huawei is also developing self-driving technology with GAC Group and Beijing New Energy Automobile and Changan Automobile. Huwaei are optimistic that they will be ready to launch autonomous cars in 2021. However, Huawei are under a little pressure at the moment as the US government have blacklisted it, preventing US firms from selling components to the Chinese telecom company. President Trump cites national security and espionage fears as reasons for the blacklist.

Volkswagon was previously in partnership with Aurora in 2018 to develop driverless cars but the agreement was dissolved within a year. Volkswagon also teamed up with Nvidia in 2018 and will use Nvidia’s Drive IX platform to build in features such as gesture control, facial recognition and language processing in its driverless cars.

In July, Volkswagon announced it would be investing in Ford’s autonomous vehicle platform, Argo AI. The deal also means that Argo AI will incorporate Volkswagon’s own autonomous vehicle group with their own, and the Argo AI system will be used to develop both Ford and Volkswagon cars. Combining their expertise and knowledge of U.S. and European markets will advance their market reach and scale. Pittsburgh start-up, Argo AI is concentrating on developing a Level 4 self-driving system and hopes to launch in 2021. Volkswagon boasts that in the future their cars will be able to locate and drive themselves to free parking spots, petrol stations and car washes.

In August 2017, Fiat Chrysler Automobiles (FCA) joined the partnership of BMW Group, Intel, and Intel-owned Mobileye to develop an autonomous driving platform. The partnership of BMW, Intel and Mobileye was established in 2016. The companies wanted to benefit from each other’s expertise and resources and in turn, share information with other manufacturers. FCA is also partnered with what the industry recognizes as the leader, Waymo. The Google subsidiary operates the industry's first paid ride-hailing service with self-driving cars in Arizona, though it's not open to the public. Waymo also announced its first production facility will be located in Detroit earlier this year.

In June this year, FCA announced it would be partnering with Aurora to develop driverless technology. The FCA plans to incorporate Aurora Driver AI technology to adapt their vehicles to operate at Level 4 capacity. Reports claim that the FCA aims to sell driverless commercial vehicles to companies for package delivery services.

In 2018, Jaquar Land Rover (JLR) announced it was partnering with Waymo to build up to 20,000 self-driving electric SUVs. The first prototype I-Pace with Waymo’s AI technology, will have undergone extensive testing before it becomes part of Waymo’s driverless taxi service in 2020. JLR and Valeo are in collaboration to combine their expertise and knowledge for research and development of the autonomous vehicle industry in Ireland.
JLT doesn’t appear to be optimistic that Level 5 autonomy will be available on rural Irish roads anytime soon.

In April, Tesla announced that they will have over one million Level 5 cars commercially ready by 2020. Tesla Autopilot was originally offered in 2014 in the Tesla Model S and features included semi-autonomous drive and parking capabilities. Today, it operates at highway speeds, and still it requires constant supervision by a human driver. Sadly, an Autopilot user died following an accident when he ignored the car’s system warning him to take control of the car.

Tesla boldly claim they will not be relying on Lidar like the other car manufacturers. They have developed their own in-house AI chip which surpasses Nvidia’s in order to realise their dream of fully autonomous vehicles on local roads as well as highways. Each car will be fitted with two of these chips for backup. Not all car manufacturers will be able to afford this expensive hardware on their fleets so Tesla looks to have the edge to take them to the finish line in first place.

As car manufacturers and tech companies jostle for first position, we may see more mergers, consolidation and partnerships as industries try to achieve what seems like the impossible. Test vehicles are doing well in controlled environments but experts reveal that the main stumbling block to accident-free driving is the unpredictability of human behaviour. Driving the wrong way down the motorway or cycling on the wrong side of the road, are elements of human behaviour that are difficult for AI technology to predict and react in a safe manner. Companies like Tesla are confident that Level 5 autonomy is achievable, while Toyota Ireland sees the customer continuing to be involved in the driving process.

So if you love the feel of a steering wheel, don’t fret, it will be many years before autonomous vehicles are commercially ready. The Department of Transport is adopting a ‘wait and see’ policy and are monitoring how other countries are navigating this new territory. It’s not year clear when Ireland will take the leap and introduce ‘robo-taxis’. While the world of driving is a little uncertain, one thing you can be certain of is that Liberty Insurance will help you navigate the future securely!

Where to start: Car recommendations for new and learner drivers

10 Tips to Pass your Driving Test 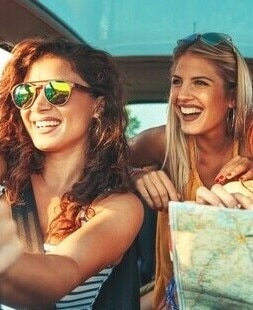